. However, this practice cannot be carried out without certain conditions. 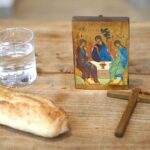