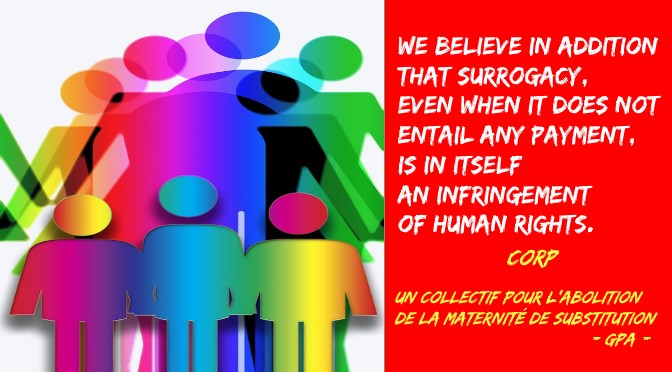 The French organization CoRP (Collectif pour le Respect de la Personne) has taken note of the study on surrogacy and sale of children presented by the Special Rapporteur on the sale and sexual exploitation of children during the thirty-seventh session of the Human Rights Council of the United Nations.

We share and support the Special Rapporteur’s observation that most surrogacy agreements, including those concluded in so-called developed countries, are nothing more than the sale of children, regardless of the legal devices used.

We also welcome the fact that the study takes into account the views of those who speak out in favor of a global ban on surrogacy, whether commercial or allegedly altruistic, and is concerned about the circumvention of protective national laws through the resort to foreign surrogates.

We do not share, however, the conclusions of the study on the possibility of regulating surrogacy in a way that would respect human rights, and in particular women’s rights and children’s rights.

On the one hand, these conclusions are unsatisfactory when compared to the very clear observations made in the study itself.

On the other hand, though we understand that the mandate of the Special Rapporteur is restricted in scope by its focus on the Optional Protocol on the Sale of Children, Child Prostitution and Child Pornography of the Convention on the Rights of the Child, we would like to reiterate that international rules intended to protect human rights must be considered as a whole.

We do not agree with the study’s conclusion that commercial surrogacy could elude the prohibition on the sale of children if the surrogate mother is remunerated solely for « gestational services » and not for the transfer of the child. Apart from the fact that this distinction is to a large extent a fiction, we want to draw attention to the issue of the exploitation of women and the infringement of women’s rights, as well as the highly problematic conception of the gestation and birth of a child as an economic « service » which can be provided in exchange for payment, and the transformation of the child into an object of trade, conceived in order to be abandoned by its mother for the benefit of a third party.

We believe in addition that surrogacy, even when it does not entail any payment, is in itself an infringement of human rights. It infringes on women’s rights, since it submits the body and the whole life of the surrogate mother to the interests of a third party, with the sole objective of giving birth to a child whom she will hand over at birth. We also know that the absence of payment does not imply the absence of pressure on the surrogate mother, in particular emotional or psychological pressure. Surrogacy also infringes on children’s rights, since the child is conceived, borne and delivered in order to be abandoned by its mother for the benefit of others, in violation of a child’s basic right not to be the object of a transaction, even if no money is at stake.

That is why we propose, within the United Nations, to draw up an international convention for the abolition of surrogacy, on the model of what was done against slavery.

In order to make the prohibition of surrogacy and the fight against this practice fully effective, provision should also be made in this convention, or in an additional protocol, for stipulations to criminalize the use of surrogacy, at least the activity of the intermediaries that facilitate it. For such action we could draw on what has been done against the sale or trafficking of children, child prostitution or child pornography.

Surrogacy Contracts: A Blight on the Human Dignity of Surrogate Mothers and the Children they Bear
Adeline Allen’s recent article focuses on the document at the crux of all surrogacy deals: the contract. Here, at the point where the two trade p...
Read more
Surrogacy: A Human Rights Violation
It is clear, even from the title—Surrogacy: A Human Rights Violation—how Dr. Renate Klein feels about surrogacy. She has spent many years studyin...
Read more
A Surrogate pregnancy is not the same as a natural pregnancy
Dear Members of the Minnesota Legislature, Today I’ve been asked to bring my expertise to clarify the medical and psychological risks for surroga...
Read more
powered by RelatedPosts