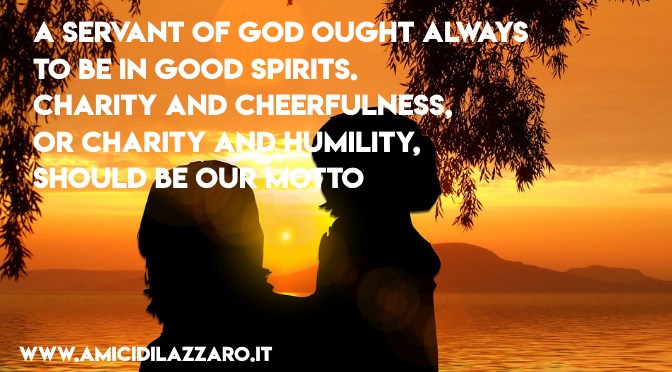 Having a proper understanding of joy is imperative to becoming a saint.

There’s a better means of obtaining the joy that comes from the Spirit, and a study of the life of St. Philip Neri reveals this.

After his ordination to the priesthood, Philip had become tremendously popular in Rome, which caused some to treat him with disdain and spread gossip about his intentions. They accused him of pride, unholy ambition, and having a vice for attention, and sought to have him removed from all activity he was involved in. Some sent for the attention of the vicar general of Rome, who questioned, then rebuked and threatened Neri with prison, before ordering him to cease all his activities.

How did Neri receive this clear and undeserved abuse? With cheer!

He informed his accusers that he was not interested in a popularity contest, but worked each day for the glory of God, and promised to remain obedient to whatever wish his superiors would have for him. Feeling patronized, the vicar general grew even more angered dismissed Philip from his house.

In private, though, Neri was greatly troubled by these accusations, for what he loved and cherished had been taken away from him. Yet he still treated his enemies with kindness until they were overcome with love for him by his mighty and courageous charity.

Each of his oppressors regained confidence in Philip with full remorse. Neri was able to resume his activities, attracting even more to his following in Rome.

Neri understood that truly joyful character is steadfast and unwavering when tested.

True joy works together with the other fruits of the spirit, especially faithfulness, patience, and self-control. A true sense of joy is pure as gold, and everyone reacts well to gold which is why, eventually, his accusers praised him for his purity.

There is more from the life and words of Neri that clarifies his true sense of joy and how we can put that to use in serving others.

The day before his death was the Feast of Corpus Christi, and Philip offered Mass in the afternoon after hearing confessions for most of the day. He seemed so fit that day that his friend and physician, Angelo Vittorio, remarked that he could live another ten years (he was seventy-nine). That night, after having retired to his quarters at the normal time, he ate his usual sparing meal and went to rest.

But, as he revealed to Nero, who was one of his closest companions, he had been given supernatural knowledge that he would pass on the Feast of Corpus Christi just as St. Gonzaga, and, desiring no extra attention, wanted to prove to those present that he was in a correct state of mind. So he asked one of those present was time it was. It was three hours after sunset. Three hours,” he replied. “If you add two onto that, it makes five, if you add three, it makes six. Off to bed with you!” Even at nearly eighty, knowing he was living his last night, our saint kept his sense of humor and used it to deflect attention from himself.

Saint Philip Neri was a man of abiding joy and solemn humor. He cracked funnies when things didn’t seem to be so funny. Who makes joked about the time of night just before dying? Even when others were held in a state of fear and anxiety, his antidote was cheer:

To a sick priest: “Be of good cheer, you will recover from this present illness.”

To one close to death: “Be of good cheer, you will most certainly not die of this illness.”

To a woman filled with terror: “Be cheerful, you have nothing to fear, believe me.”

His words should fill us up with saintly cheer, his stories should make us laugh, and his life should make us contemplate the mysteries of the devout life. In his own words:

“Cheerfulness strengthens the heart and helps us to persevere. The true way to advance in holy virtues, is to advance in a holy cheerfulness. The cheerful are much easier to guide in the spiritual life than the melancholy. A servant of God ought always to be in good spirits. Charity and cheerfulness, or charity and humility, should be our motto.”
Shaun McAfee

10. Why him? Why her?
When we see two people who are deeply in love with each other, we often think to ourselves that it makes sense because they have so much in commo...
Read more
24. When does human life begin?
Human life begins at the precise moment when the two half-cells, the sperm of the man and the ovum of the woman, meet and form the first cell of ...
Read more
Surrogacy: No Laughing Matter
On April Fools’ Day last year, a German LGBTI website came under attack for announcing the raffle of a surrogate mother in Thailand and an ...
Read more
powered by RelatedPosts