I’m in Spain at the time of this writing, where I have been invited to speak on the topic of “Reproductive Exploitation.” One of the slides in my talk made the claim that reproductive exploitation is the newest form of human trafficking. Another speaker at the conference, an attorney, disagreed with my claim. This attorney believes that egg donation and surrogacy is definitely exploitative and perhaps violates the human rights of the individual woman and the child, but these practices could not and should not be described as trafficking. I disagreed with her – let me explain why.

• Acts of trafficking, include recruitment of persons. Young women are heavily recruited for their eggs and their wombs. Advertisements offering large sums of money to sell their eggs or rent their wombs are a direct means of recruitment.

• Means of trafficking, such as forms of threat or coercion, fraud, deception, the abuse of power or of a position of vulnerability, or of the giving or receiving of payments or benefits. Egg donors and surrogate mothers are coerced by the offer of large sums of money and deceived about the risks and harms. If these risks are mentioned they are downplayed. There is a clear abuse of power over the economically disadvantaged donor or surrogate. The contracts these women sign is full of threats of breach of contract language for any non-compliance. Calla Papademas, in “Eggsploitation,” suffered a stroke in her attempt to sell her eggs. She was told she failed to disclose a pre-existing medical condition (which she was unaware of therefore unable to disclose it) and therefore was paid only $750 for failure to complete her donation cycle. Her contract had promised her $15,000. Calla will never be able to have her own children due to her stroke. Kelly Martinez, in “#BigFertility,” was lied to repeatedly in one surrogacy arrangement and told if she didn’t go along with a scheme the agency and intended parents cooked up, she’d have to pay the money back and keep the children. People in position of power abuse the vulnerable women they recruit.

• Purposes of trafficking: exploitation, which is at the heart of trafficking, for the purpose of forced labor or services, slavery or practices similar to slavery, servitude, or the removal of organs. I often say, read a surrogate contract and tell me she isn’t enslaved for the duration of the pregnancy! Watch our films, “Eggsploitation” or “Breeders: A Subclass of Women?”, or “Maggie’s Story” or “#BigFertility” and tell me these women weren’t recruited, enslaved, exploited, or deceived. These films alone show how egg donors and surrogate mothers are put in a vulnerable position by those with more power over them.

Egg donors and surrogate mothers are manipulated into vulnerable positions where the more powerful are motivated by the monied interest of their eggs or the baby(s) they are carrying.

For those who might say that women have given their consent, the Trafficking Protocol says, consent is irrelevant where any means of the act of trafficking have been used. So, if a woman has given her consent, but has been recruited, coerced, deceived, given money or gifts, and exploited, that nullifies any consent she has given.

Of course, the case of women trafficked for their eggs or wombs, in the poorest of countries, is more evident. But the white-collar crime happening in wealthy countries like Canada and the U.S., still fits within the Trafficking Protocol definition.

I’ve written in the past that the industry of egg “donation” fits within the protocol of what defines human trafficking per the United Nations. I believe this definition expands to the area of egg donation and surrogacy as well. While in Spain, I spoke with Mats Paulsson, head of the Human Trafficking Unit of the Gothenburg Police in Sweden. He had never thought about egg “donation” and womb rental as a trafficking concern but had his eyes opened after hearing my presentation. He confirmed my belief that this most definitely can fit within the definition of trafficking. Paulsson suggested I reach out to Valiant Richey, Deputy Coordinator, Office to Combat Human Trafficking at OSCE. I contacted Mr. Richey through LinkedIn and we’ve had a private exchange about my concerns. He did say he had been hearing a lot about the surrogacy issue and I offered my assistance if he wanted to hear more.

I’m still standing by my claim, that not only are the human rights of these women violated (as well as the children born of their reproductive bodies, but that’s for another piece!), but these women, per the U.N. definition of human trafficking, are also victims of this abuse as well. Just as we would agree to abolish (not regulate) slavery, the buying and selling of a human being, we must work to abolish the exploitation of women for their eggs and wombs. 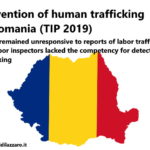