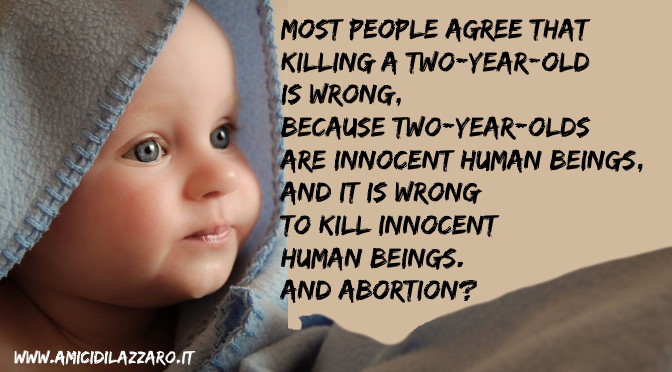 In his groundbreaking Pro-Life book, Persuasive Pro-Life, Apologist Trent Horn teaches pro-life ambassadors how to stay on message using a technique called “Trot Out A Toddler.”

Most failed conversations about abortion happen when the pro-life advocate doesn’t stay on the one question that matters most: “What are the unborn?”

In order to help stay on message, I use a tool created by pro-life apologist Scott Klusendorf called Trot out a Toddler (TOAT). My favorite articulation of TOAT was created by my former JFA colleague Steve Wagner, which he calls “the four A’s.” They are Agree, Apply, Ask Why, and Ah! Here’s how they work.

Whenever possible, agree with the sentiments behind the reason being given to keep abortion legal. Some pro-life advocates think that agreeing to anything is a sign of weakness, but pro-choice advocates see it as a sign of compassion and understanding. For example, when poverty is mentioned, you can agree that caring for an impoverished child is difficult. When the “right to choose” is invoked, you can wholeheartedly agree that women should be able to choose all sorts of things. Invoking many areas of agreement at the beginning of the conversation will create rapport and a sense of good will that can help ease tension when you discuss areas of disagreement. But your agreement should not be merely used as a strategy way to win the argument. Instead, genuinely show concern for the lives of both the born and unborn people who are affected by an unintended pregnancy.

Next, take the reason being given to justify abortion and use it to justify killing a two-year-old. This takes practice, and I recommend that when you describe the example, extend your hand two or three feet off the ground, as if you were touching the top of a two-year-old’s head. If you get stuck, remember that the “apply” always starts the same way: Extend your hand and say, “Imagine I have a two-year-old here, and his mother . . .”

This works for almost any reason that does not answer the question “What are the unborn?”  For example, regarding poverty, you might say, “Imagine I have a two-year-old here, and his mother is poor and feels like she cannot care for him. Should she be allowed to kill him?” This may seem like a silly question, but that is precisely the point. If unborn children are as human as toddlers, then it should be just as silly to ask the question, “Imagine I have a poor pregnant woman who feels like she cannot care for another child, should she be allowed to have an abortion?” The only difference is the age of the child who is being killed.

No matter how silly it sounds, ask the person only if the reason women need legal abortion (poverty, choice, women’s rights, etc.) would also be a good reason to kill a two-year-old. Then be quiet. Just let the question hang in the air until the pragmatist responds.

In rare cases you may encounter a pro-choice advocate who says that it would not be wrong for a mother to kill her two-year-old. There are two reasons people say this. The first is they don’t want to have a real conversation. They don’t actually believe in killing two-year-olds, but they will say they do to provoke you. Don’t fall for it. Simply say, “Well, if you don’t have any respect for human life, then why should I have any respect for what you believe?” You can also ask, “Do you want to have a serious conversation or do you just feel like wasting my time?”

Even though a few odd people will answer otherwise, this step is the easiest of the four A’s. Most people agree that killing a two-year-old is wrong, because two-year-olds are innocent human beings, and it is wrong to kill innocent human beings. The pragmatist may even anticipate where your questions are leading and say it is wrong to kill a two-year-old because he is a person, or a born human, or he is breathing, or he is in some way different than an unborn child, who we are allowed to kill. This is exactly where you want the conversation to go.

The last part of “trot out a toddler” is the most complicated but also the most important. It narrates the epiphany the pro-choice person should be having in relation to the pro-life position. In this step, the pro-life person responds to the answer to step three and says, “Ah [or “Oh,” or any other appropriate exclamation], so that’s the issue. The issue is not about poverty [or choice, or age, or health, or whatever original reason was offered as to why abortion must remain legal], because you wouldn’t justify killing a two-year-old for that reason. If the unborn are just as human as a two-year-old, then we shouldn’t kill them for that reason, either. You and I just disagree over whether unborn children should have the same rights born children possess.”

The Baby I Would Never See
I turned 16 just two months before I became pregnant in 1976. Getting pregnant was not in the cards and I was scared and embarrassed to tell anyo...
Read more
Ethicist destroys pro-abortion argument that preborn ‘fetus’ isn’t a person
Editor's note: London-based ethicist Dr. Anthony McCarthy is the editor of the newly released book Abortion Matters. The book provides clear, con...
Read more
Child sacrifice still exists among some tribes…but Western elites see no problem
In April of 2018, archaeologists in Peru announced a horrifying discovery: Evidence of what appears to be the largest single mass child sacrifice...
Read more
powered by RelatedPosts