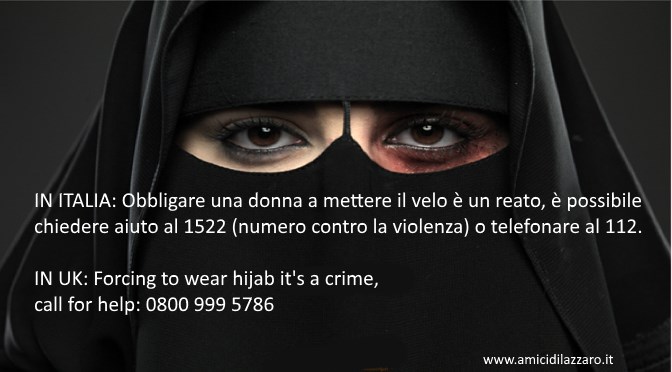 “It is obligatory on Muslim women to wear hijab (i.e., cover the whole body except the face and hands, and the feet according to some schools of jurisprudence).

It is unanimously agreed upon among Muslim scholars that it is not lawful for a Muslim woman to uncover any part of her body other than the face and hands (and the feet according to some schools of jurisprudence). Hence, it is unlawful for a woman to reveal her hair, or arms, or chest or legs before non-mahram men. Wearing clothes that reveal such parts of a woman’s body is completely forbidden.

A Muslim husband is to order his wife to wear hijab. Allah Almighty says: “O ye who believe! Ward off from yourselves and your families a Fire whereof the fuel is men and stones, over which are set angels strong, severe, who resist not Allah in that which He commandeth them, but do that which they are commanded.” (At-Tahrim: 6)

Allah Almighty also says: “And enjoin upon thy people worship, and be constant therein. We ask not of thee a provision: We provide for thee. And the sequel is for righteousness.” (Taha: 132)

Muslim wives are to obey their husbands and wear hijab. If a woman disobeys her husband in that respect, he should take a serious decision on the matter if they are still in the beginning of their marriage.
When a Muslim man proposes to a woman that does not wear hijab, he should stipulate that she wear it as soon as they marry. [For example,] he can say to her, “I am a committed Muslim person. I fear Almighty Allah. I do not want to disobey Him Most High. All I want is to please Him; hence, I do not accept that my wife be mutabarrajah or displaying her charms in public without committing herself to proper Islamic dress.” By clarifying his attitude in that respect from the beginning, his fiancée would be obliged to wear hijab as soon as they marry.

It is to be noted that a Muslim woman is principally obliged to wear hijab, for Allah Almighty has ordained her to do so. Her husband’s ordering her to wear it is a kind of emphasizing that obligation.

A man might marry a woman who is not used to wearing hijab before marriage, without discussing with her the importance of wearing it, because he has not been a firm follower of the teachings of Islam. Then, when Allah Almighty guides him to the right path, he wants his wife to repent with him and wear hijab. If the wife hesitates in that regard, he is to try gently again and again until he can convince her so that she becomes guided to the right path, too. However, if the wife does not obey him and he has lost all hope of convincing her of wearing hijab, he should, rather, divorce her if they are still in the beginning of their marital life (and have not begot children yet). Life would not be stable between a husband who is firm in faith and a wife who does not obey him and does not care about obeying Almighty Allah.

Also, a husband might return to the right path after he has lived with a wife who doesn’t commit herself to the proper dress code for women for years and begot children from her. If he then wants her to wear hijab, he is to try to convince her gently on the matter; but if she insists on not wearing hijab, he is not to divorce her so that their family does not disintegrate. Rather, he is to be patient and try again and again to advise her.”