The government decreased law enforcement efforts. The criminal code criminalized some forms of sex trafficking and labor trafficking. Various provisions of the criminal code could be used to prosecute sex trafficking offenses. Article 240 criminalized “the abduction and sale of women or children,” which included abduction by deceit, kidnapping, purchasing, selling, sending, receiving, and transferring for the purpose of sale; however, unlike the definition of trafficking in persons under international law, Article 240 did not explicitly link these acts to a purpose of exploitation. Article 240 prescribed penalties of five to 10 years’ imprisonment and fines for the abduction and sale of women and children. If an abducted woman was then forced into prostitution, the penalties increased to 10 years to life imprisonment, fines, and confiscation of property. These penalties were sufficiently stringent.
Article 241 criminalized the purchase of abducted women or children and prescribed a maximum penalty of three years’ imprisonment, short-term detention, or controlled release; like Article 240, it did not require that the purchase be for the purpose of exploitation. Penalties under this provision were not alone sufficiently stringent; however, Article 241 stipulated that if an individual purchased an abducted woman or child and then subjected them to “forcible sexual relations,” they would face additional penalties under the criminal code’s rape provisions. Article 358 criminalized forced prostitution and prescribed penalties of five to 10 years’ imprisonment; if the offense involved a child under the age of 14, the penalties increased to 10 years to life in addition to fines or confiscation of property.

Labor trafficking offenses could be prosecuted under Article 244, which criminalized forcing a person “to work by violence, threat, or restriction of personal freedom” and recruiting, transporting, or otherwise assisting in forcing others to labor, and prescribed three to 10 years’ imprisonment and a fine. These penalties were sufficiently stringent.
The central government did not capture or report comprehensive law enforcement data, and it continued to report statistics for crimes outside the definition of trafficking according to international law (including migrant smuggling, child abduction, forced marriage, and fraudulent adoption), making it difficult to assess progress. For the second consecutive year, the Ministry of Public Security (MPS) did not report the number of investigations initiated into possible trafficking cases (1,004 in 2016), although media reports suggested authorities continued to investigate some cases. Data published by the Supreme People’s Court (SPC) indicated it prosecuted and concluded at least 634 trafficking cases (1,146 in 2017), culminating in 1,252 individuals convicted (1,556 in 2017).

Authorities engaged in law enforcement cooperation with foreign governments, investigating cases of Chinese citizens subjected to trafficking in Burma, Cambodia, Cyprus, Macau, and Singapore; as part of similar efforts in previous years, Chinese authorities attempted to extradite—and criminally charge—Chinese and Taiwanese individuals subjected to forced labor in Europe. During the reporting period, the government increased its consultative partnerships with Lao, Mongolian, and Vietnamese law enforcement authorities to jointly address trafficking via the forced and fraudulent marriage of their citizens to Chinese individuals. Some law enforcement personnel in neighboring countries reported their Chinese counterparts were unresponsive to requests for bilateral cooperation on cross-border trafficking cases, while others reported China’s cumbersome law enforcement bureaucracy hindered joint operations.
The government did not provide data on specific law enforcement trainings, unlike in prior years. However, according to an international organization, the government allocated increased funding to co-host capacity-building training for law enforcement and judicial officials on investigating and prosecuting trafficking cases. During the reporting period, China launched a nationwide campaign to investigate corrupt local officials and police officers allegedly using their influence to shield or profit from criminal organizations engaged in prostitution rings; this included efforts to address sex trafficking. Officials found guilty through this process reportedly faced expulsion from the Chinese Communist Party, termination of their official positions, fines, and referral to the judicial system. However, authorities did not provide statistics on the number of investigations, prosecutions, or convictions resulting from this campaign.
Adapted from TIP 2019 by the U.S. Department of State 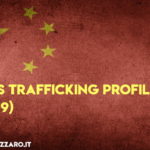 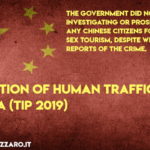