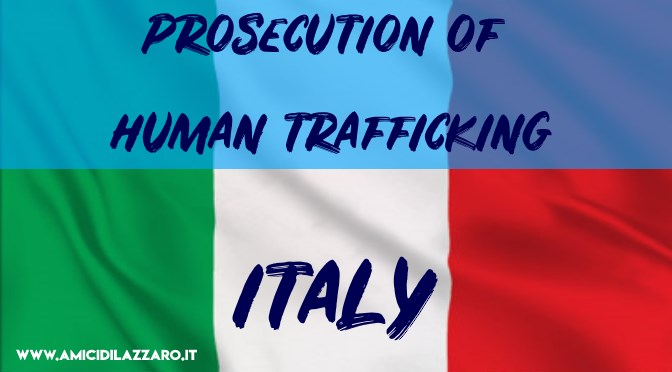 The government did not report data on sentences imposed under the trafficking law in 2017 or in years prior, and stated only that convicted traffickers generally received prison sentences ranging from seven to eight years (compared to six to nine years in 2016). For example, in November a Palermo judge sentenced two Nigerian traffickers to prison for eight and seven years, respectively, and required €20,000 ($24,010) in restitution to their victim. In July, a court in Lecce sentenced nine foreigners and two Italians to prison terms of 11 years each for labor trafficking. In July, a Rome court upheld the 12-year prison sentence of a Romanian for sex trafficking of two minors.

Investigators prioritized trafficking syndicates, reflected by the arrest in November of 23 Nigerians in Palermo belonging to the trafficking syndicate Black Axe, the arrest of a network of 28 agricultural labor traffickers during the year prior to November 2017, and the arrest in February by financial police of a gang of seven labor traffickers in Calabria. Some source countries stated collaboration with Italian authorities on investigations was insufficient. Prosecutors cited positive results from increased cooperation with the Libyan Government of National Accord (GNA), as evidenced by the GNA-issued arrest warrants for 200 suspected traffickers in Libya that stemmed from the joint investigation. There were no investigations or prosecutions of government employees complicit in trafficking offenses.

The variety and number of trainings on trafficking offered to law enforcement and prosecutors increased. The government sponsored several interagency training exercises and simulations on anti-trafficking methods, including a September training with NGO participation. Prosecutors initiated an exchange with 22 African countries to bring prosecutors to work alongside Italian prosecutors for six months of training, enhancing cooperation between Italy and source countries. The training curriculum for law enforcement agencies included victim identification and investigation of trafficking crimes.