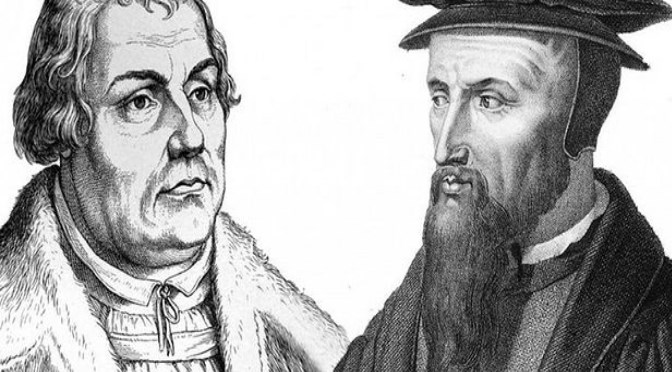 Myth: The Reformers were holy men who struggled heroically to free the true Christian faith from the superstitions of Rome

Martin Luther (1480-1546) and John Calvin (1509-1564) are generally regarded as holy and upright men appalled at the impiety, superstition, and corruption in the Catholic Church, and dedicated to returning the Christian faith to its pristine original form. But a closer look at their lives reveals that, in truth, they were arrogant men bent on refashioning the Christian faith to their own liking.

Luther suffered throughout his life from various physical and spiritual problems. He was desperate for certain knowledge of his own salvation, and came to believe that it is through faith alone that one is saved. He adopted the heresy that Scripture alone is the authoritative source of divine revelation. Luther’s image of God, which may have reflected that of his abusive father, was extremely negative and influenced his theology and his conflicts with authority. To Luther, God was not a loving father, as revealed by Christ, but rather was a tyrannical and wrathful judge who delights in tormenting sinners. As he later wrote, this belief drove him to “the very abyss of despair so that I wished I had never been created. Love God? I hated him!”

Luther posted his Ninety-Five Theses on the church door in Wittenberg on October 31, 1517. Although many of the theses dealt with ecclesiastical abuses, Luther’s contention that the pope had no authority to grant indulgences was outright heresy, and in 1520 Pope Leo X condemned it and forty other erroneous teachings. Luther’s response in the form of three treatises published late that year laid the foundations for his revolution against the Catholic Church. In these treatises he appealed to the German nobility to nationalize the Church in Germany and free it from Roman control. He also attacked the sacraments, denying that they are channels of efficacious grace when faith is absent. In the treatise he addressed specifically to Pope Leo, he denied free will; and he later called for the suppression and eradication of the Mass.

Luther’s revolutionary writings led to outbreaks of violence throughout Germany. By 1525, mobs had destroyed churches, burned sacred art, and profaned the Eucharist. Nobles sympathetic to Luther’s teachings appealed to him for help ending the violence.

In response, Luther wrote a pamphlet titled Against the Murderous, Thieving Hordes of Peasants, in which he called on the nobility to suppress the rebellion with all necessary violence, which they did with ferocious efficiency, killing 130,000 peasants. That same year Luther married a former nun whom he helped “escape” from the convent. Several years later Luther’s break with Christian teaching on marriage was made complete when he advised Philip, landgrave of Hesse, that he could enter into a bigamous marriage so long as he kept it secret. When word of it leaked out, Luther advised Philip to deny it, writing, “What harm is there in telling a good bold lie for the sake of making things better and for the good of the Christian Church?”

Toward the end of his life Luther wrote On the Jews and Their Lies, a treatise in which he put forth an eight-point plan to rid Germany of its Jews. “If we wish to wash our hands of the Jews’ blasphemy and not share in their guilt,” Luther wrote, “we have to part company with them. They must be driven from our country. We must drive them out like mad dogs.” In Luther’s last treatise before his death in February 1546, Against the Pontificate at Rome, Founded by the Devil, he called for the torture and murder of the pope and cardinals.

John Calvin was of a different temperament than Luther. Whereas Luther was bombastic, rude, and vulgar, Calvin was studious, quiet, and refined. Despite their differences, though, Calvin was just as much a revolutionary, and it was he who began the “war against joy” in Geneva. Hilaire Belloc pointed out that “it was the French spirit, but the northern French, the less generous, the people that have no vineyards, which produced Jean Calvin.”

By 1545 Calvin had created a theocracy in Geneva which enforced its own version of Christian morality upon the citizenry. Citizens were sometimes required to confess their sins in front of a civil magistrate, and were subject to biannual visitation by a commission of elders and ministers who investigated whether they attended church services regularly and lived moral lives in accord with Calvin’s creed, and classified them as “pious,” “lukewarm,” or “corrupt” in their faith. The death penalty was prescribed for adultery, blasphemy, idolatry, pregnancy out of wedlock, and striking a parent. It was also against the law in Calvinist Geneva to dance, sing (outside of church services), stage or attend theatrical plays, wear jewelry, or play cards or dice.

Calvin also railed against fellow Protestants when their theology did not agree with his. The most famous case involved Michael Servetus (1511-1553), whose 1531 work Seven Books on Errors About the Trinity landed him in trouble with the Spanish Inquisition. He fled Spain for France, where he began writing letters to Calvin asking his opinion on various points of theology. Servetus disputed Calvin’s answers, as well as many of Calvin’s teachings in his Institutes of the Christian Religion. When a marked-up copy of the Institutes arrived from Servetus, Calvin became incensed and vowed, “If he [Servetus] comes [to Geneva], I will never let him depart alive.” When in 1553 Servetus did come to Geneva he was spotted by Calvin, arrested, tried for heresy, convicted, and burned.

The Real Story: Martin Luther and John Calvin were complex men who were anything but the pious reformers of modern myth. They viciously attacked their critics. Luther’s writings spurred an armed rebellion in Germany that had to be forcibly put down by the nobility. Calvin created a theocracy in Geneva that interfered in the private lives of all citizens. Both men rebelled against the Catholic Church and contributed to the fracturing of Christendom, which persists to this day.

Friends in prayer. An easy way to discover God’s closeness

In early January 2020, given the many prayer requests that I received via text message, email and social media, I asked some virtual friends to join in prayer every day with a decade of the […]

Blessed Cyprian Michael Iwene Tansi was born in 1903 in Igboezunu, at the edge of: the forest near the ancient city of Aguleri in southern Nigeria. His parents, Tabansi and Ejikwevi, were Igbo farmers who […]

1.English Medjugorje Message, December 25, 2019 “Dear children! I am carrying my Son Jesus to you, for Him to bless you and reveal to you His love, which comes from Heaven. Your heart yearns for peace, […]